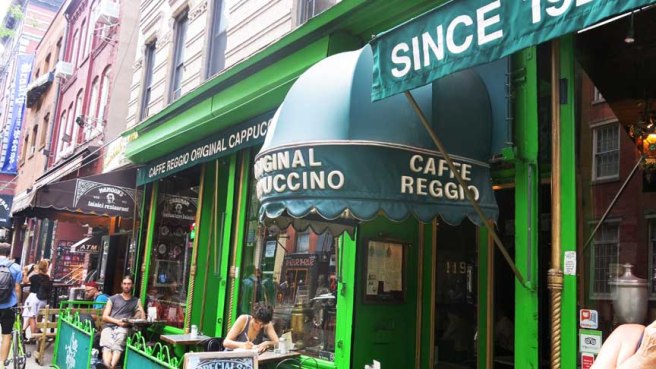 On this hot July weekend I gravitated twice in two days to the neighborhood where I spent the summer of 1972. Miraculously, not much has changed on the stretch of MacDougal that was right around the corner from my Bleecker Street tenement.

Friday, I dipped into the cool of Caffe Reggio for an iced cappuccino. It’s hard to tell if any grime has ever been removed from the old world paintings, and the only upgrade I could detect was electrical outlets added for laptops popped open on the small marble tables. 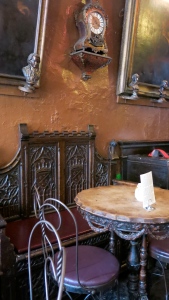 I looked around and was relieved to see something else—a paucity of tourists! Instead, young city dwellers (iGens, my savvy Boomer buddy from days of yore informed me) holed up in the still cozy surroundings, plugged into the old Beat Generation vibe for the price of an espresso.

By the spring of 1972, the neighborhood’s charms had tarnished a bit since the Beat Generation made it their digs a decade or so earlier. Still, junkies nodding out near West 4th Street couldn’t completely mar the aural graffiti scratched by Bob Dylan onto Washington Square. Our stoop put us directly opposite the famed Cafe Figaro.

In fact, there were authentic Beat cafes everywhere we turned. I discovered the nirvana of cappuccino—heavenly foam forming a cinnamon cloud cover to the dark, rich roast I had never before experienced. I’d sit at a sidewalk table, sipping slowly with the regulars, rubbing shoulders with ghosts of beatniks past. I learned to diplomatically deflect the panhandlers, all the while keeping an eye peeled for Dylan to stroll by with Donovan, interpreting “Subterranean Homesick Blues” as he gave Sunshine Superman the grand tour before ducking down Minetta Lane. The Fat Black Pussycat was still there, a cafe where Dylan supposedly penned “Blowin’ In the Wind.” But my main haunt was the dark-walled Caffe Reggio that opened onto the street near West 3rd. The many solo patrons kept to themselves, and so did I. I was learning how easy it was to be alone without being lonely. With no Camus at hand—not even Ginsberg’s “Howl”—I hunkered down with my cappuccino and cannoli, embracing my own anonymity. — Hell’s Kitchen and Couture Dreams

4 thoughts on “Meet Me on MacDougal Street ~ Part 1”