It’s every generation’s lament. When I look at the downtown city skyline, I barely recognize anything. The area—especially around and below Houston Street—is now shimmying with new kids on the block. Ubiquitous glass and chrome high-rises continue to shoulder their way into old neighborhoods like the Lower East Side. I know change is inevitable, I know Manhattan was founded on the bedrock of commerce—but like most aging New Yorkers, I also love to complain about it. New millennial money, faux immigrant hipsters, and corporate chutzpah have made me avoid my old stomping grounds for over a decade. But this past weekend I wanted to take in a block festival in NoHo, see an art exhibit on Eldridge Street, and purchase my favorite plastic summer slippers in Chinatown. Where I finally found a skyline that I could still embrace. 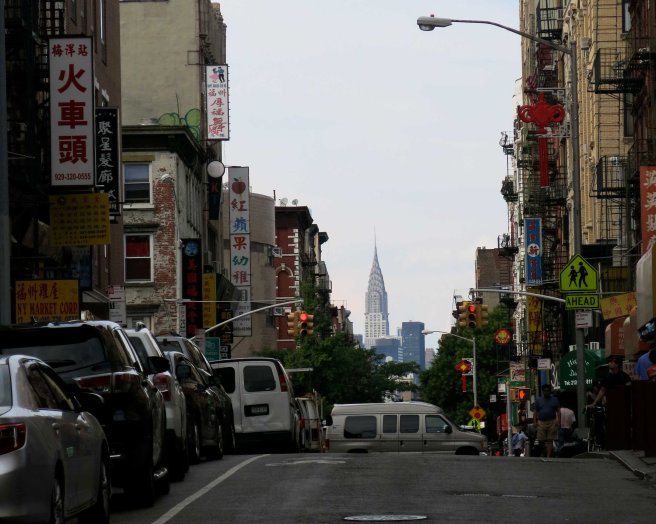 My very first apartment was on 2nd Street between Avenues A and B. In 1971, you made sure you were triple-locked-in at night. But—oh!— during the day, there was nothing more exotic than exploring the Lower East Side. 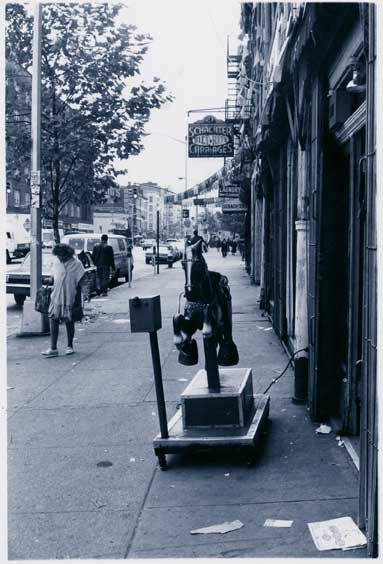 Tessa and I pooled the last of our five dollar bills and moved our meager belongings out of the YWCA—one trip via “Man with Van”—down to 2nd Street between Avenues A and B. Our new home would be a fifth floor walk-up with the prerequisite ornate fire escape, dingy hallway, cooking smells, and marble stairs; each one literally worn down and sloped to the center from a century of treading shoes. The heavy door had a peephole and the old iron police lock—a bar that angled up from a slot in the floor on the interior to brace the back of the door against a break-in. Once inside, we were standing in the small kitchen dominated by a claw-footed bathtub next to the sink. A tiny water closet off to the side was large enough for a toilet, with its pull chain connecting to a wooden box suspended above. I loved the very quaintness of the antique plumbing, every yank of the chain metaphorically flushing away the rube I had been. Exposed brick walls added the kind of charm I could never even imagine in my suburban fantasizing, and a non-working potbellied stove plunked in the central room was altar to our new sanctuary.

“Wow. I can’t believe we’re here in our own place!” I circled slowly to take it all in. The pièce de résistance was a partitioned area that housed our separate closet-sized bedrooms. Each held a loft bed platform with a built-in desktop and clothing rod below. There was no natural light; the windows faced an air shaft with a foreshortened view of the next building that we could almost touch. A burglar gate was in place over the kitchen window next to the fire escape. Who needed light? We were positively beaming!
Our landlord had even given us a modest stipend to furnish the flat. Feeling like kids let loose in a candy store, Tessa and I first bought thick foam cut to order on East Houston Street—two mattresses for our loft beds. That was our first encounter with Hassidic shopkeepers who were ruling over their individual fiefdoms in cramped and dusty storefronts while I had been wheeling a cart in the wide-aisled Weis Market and selecting sheets in Bowman’s department store back home. Next we purchased a used wooden kitchen table and an old rocking chair, precariously hauling them by foot down Avenue A on a mover’s dolly. Home Sweet Tenement! —Hell’s Kitchen and Couture Dreams

2 thoughts on “Whose Skyline Is It Anyway?”